Everyone loves economics, don’t they? So I asked @t_wainwright, of The Economist, for his personal views on some of the political and economic issues behind the Mexican drug wars in general and the situation in Juárez (setting for Saint Death) in particular.

Tom, first of all, thanks very much for agreeing to answer a few questions, and congratulations on your thought-provoking book, Narconomics: how to run a drug cartel.

MS: To research your book, you spent some time in Juárez. Things are a little easier there now than they were just a few years ago when the turf war between the CDJ and the Sinaloa cartel was at its peak. Nevertheless, it remains a poor and violent place. As Charles Bowden put it in an indelible phrase; Juárez is ‘the laboratory of our future’. He wrote that almost twenty years ago; but what does your recent experience of Mexico tell you – how strong is the link between poverty and violence?

TW: Let’s start with a counter-intuitive point: by Mexican standards Juarez is not that poor. All the northern border states have average incomes that are well over those that you find in the south (the map in this old story of mine is now rather old, with figures from 2010, but it gives you an idea of what I’m talking about: http://www.economist.com/news/special-report/21566773-after-years-underachievement-and-rising-violence-mexico-last-beginning). Nuevo Leon, where there has been horrendous violence in recent years, is richer in per capita terms than the poorest EU countries, and far richer than states like Chiapas, which see very little violence. Of course, there’s steep inequality, and there are plenty of people in Juarez that are dirt poor. I just think it’s worth keeping in mind that if you drew a map of Mexico and tried to associate poverty and violence at the state level, there wouldn’t be much of a correlation.

That said, of course on a micro level there is a link. I suppose there are two parts to it: first of all, poor countries have weak institutions—police, courts, the army, you name it—which makes them more vulnerable to organised crime. Look at Belize, population 300,000, whose government did not own a single helicopter last time I visited. It’s hard for them to combat criminal gangs with access to relatively high-tech weaponry. The second link is that in poor countries it’s cheaper for gangs and cartels to hire people and to bribe officials. A Mexican policeman’s pay is lower than an American’s, and a Guatemalan’s is lower still. They all have their price, but of course it’s lower where salaries are lower. Likewise hiring people: it’s easier to hire teenage lookouts in Juarez than in El Paso because wages are lower and jobs scarcer. 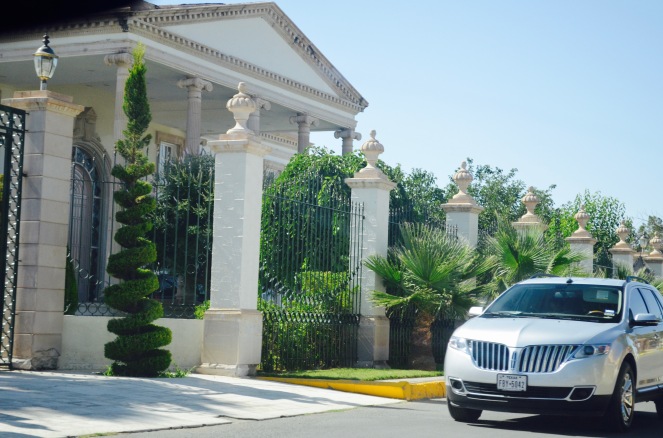 Homes of the rich…

…and the very poor of Juárez.

MS: NAFTA [the North American Free Trade Agreement] is now twenty-two years old, part of what you describe in Narconomics as ‘an international fashion for free trade.’ You note that one of its effects was that it caused the price of Mexican corn to tumble, due to competition from north of the border, leading many Mexican farmers to switch to a different crop instead: marijuana. The effects of NAFTA remain disputed; e.g. a 2004 study by Fiess and Lederman argued that there were other factors that had affected the price of Mexican corn. On the other hand, that study was by the World Bank, who an economist like Michael Hudson would argue are effectively in the employ of the US government in policy terms.

So here are two questions: Firstly, overall, what do you believe has been the effect of NAFTA on the Mexican economy and people? And secondly, how strongly do you think it can be argued that NAFTA has in any way enabled the drug trade from Latin American to the US?

TW: Well, I work for The Economist, which was founded in 1843 to protest against tariffs on corn. So I am pro free-trade agreements such as NAFTA, and anti the American protectionism that has contributed to the woes of Mexican farmers. If Mexican corn farmers are being undercut by subsidised American corn farmers, that to me suggests a lack of free trade, not an excess of it. America has repeatedly broken NAFTA rules—the independent panel which resolves NAFTA disputes has found against it on several occasions. If it stuck to the rules and gave up its addiction to farm subsidies Mexican farmers and American taxpayers and consumers would all be better off.

Lots of people on the left think that NAFTA is responsible for all sorts of ills. I don’t buy it. Mexico is one of Latin America’s richest countries, and its border states are the richest of the lot. Free access to the world’s biggest market is a huge bonus to Mexico. A generation ago, tariffs on imports meant that Mexican consumers faced sky-high prices in order to support failing Mexican industries. Free trade has lowered prices for consumers—bankrupting some local firms in the process, it’s true (Mexican shoemakers are being outdone by Chinese rivals, for instance), but creating big new industries that tend to be higher value (aerospace in Queretaro, biotech in Baja California, etc etc). Anyway, a big debate, but I think NAFTA has been good for Mexico.

Has it enabled the drug trade? I can’t see how it has, really. I suppose more trade means that there’s more traffic in which one can smuggle drugs. It would be harder to smuggle them over a completely closed border. But I can’t see many other links. I’d be interested to hear them though.

MS: Are you familiar with this Harvard paper..?http://scholar.harvard.edu/vrios/publications/evaluating-economic-impact-mexicos-drug-trafficking-industry

Written by Viridiana Rios, it argues that the drug trade results in an annual net economic loss to Mexico of around $4.3 billion dollars. (This paper was published in 2008.) It’s been nearly thirty years since I took my degree in Economics and Politics but to me this paper seems rife with guesswork, supposition, plucking numbers from the air and the making of spurious calculations. No one really seems to know how much the cartels make annually from sales of drugs to the US – I’ve seen figures between $10bn and as high as $90bn, which suggests to me that people don’t really know, but we can be sure it’s a lot, and the same paper estimates that nearly half a million people are employed by the cartels, one way or another. For the UK, you give a figure of an annual $7.4bn contribution to GDP from the illegal drug trade, so I would love to know your view on a simple question that I am sure does not have a simple answer – is the Mexican economy dependent on the drug trade, and can it be quantified?

TW: I’m afraid I haven’t read this paper, but I agree that when it comes to illegal markets it’s best not to trust anyone who claims to know anything very exactly. These businesses don’t file accounts! (I think the Rand Corporation has done some of the best quantitative work on drugs, by the way – worth checking out their papers. They’re pretty cautious.)

That said, I think it’s safe to say that the idea that the Mexican economy is dependent on the drug trade is mistaken. Mexico’s GDP is something like $1.3 trillion (I confess, that’s a Wiki fact – please check the latest yourself!). I don’t know how much the cartels make from selling to the US, but I would guess it’s nearer the lower end of the range you cite. Americans spend very roughly $100 billion a year on drugs (see eg. https://www.whitehouse.gov/sites/default/files/ondcp/policy-and-research/wausid_results_report.pdf). Most of that doesn’t make it back to Mexico. For one thing, a growing share of marijuana (the biggest drug market of the lot) is home grown. But even with cocaine, most of which comes through Mexico or is handled by Mexican cartels in Central America, the big price increase happens in the States, after importation. A pure kilo imported into LA costs something like $20k. By the time it’s sold in grams, that pure kilo is worth more like $150k. In some cases the Mexican gangs will manage the whole supply chain, right down to the dealers. But I think on the whole they don’t. If their role ends in LA, they are walking away with a smallish share of the total value.

A second point is that the drugs business and the crime that goes with it does enormous damage to Mexico’s economy, by weakening institutions, deterring investment, putting off tourists, etc etc. If Mexico could abolish crime it would be much better off—a zillion studies will tell you how important security is to development. I think when you take all that into account it’s clear that Mexico loses out from the drugs business.

MS: Finally, I want to return to that phrase of yours; the ‘international fashion’ for free trade. Most people in the US and the UK/Europe at least would assume that there is no alternative, so successful has the progress of this model been, despite the suggestion by Noam Chomsky, when writing of NAFTA, that: ‘such agreements have only a limited relation to free trade.’ So are there alternatives and what would they look like?

TW: As I said above, I’m a follower of this fashion myself—I’ll be voting to Remain in our referendum on June 23rd! Are there alternatives? Certainly: look at Mexico pre-NAFTA, or Mercosur today. I don’t think it’s encouraging.

MS: Thanks again for being here, and good luck with your book; Narconomics.