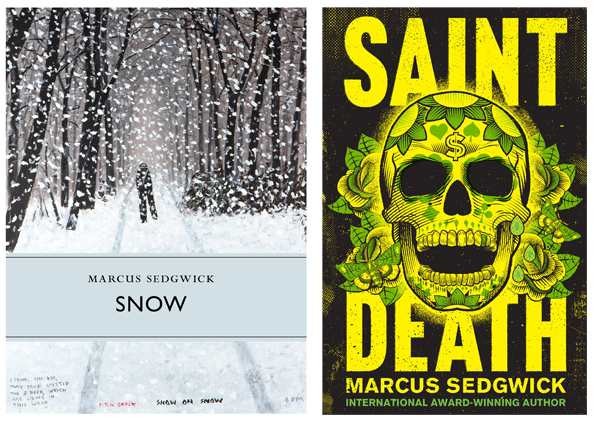 Snow and Saint Death are two very different books on the face of it, but aside from the fact they’re both published a month from today and that they both came out of my word processor, there’s something deep inside each that links them.

Saint Death plays out in and around the city of Juárez, Mexico, literally on the border with the US. It’s a story about money, drugs and power, and the lives of those without any of these things.

Here’s a short film to set the scene:

Snow, on the other hand, is a piece of non-fiction, a long essay about the white stuff, a very personal piece of writing, maybe almost a love letter to those hexagonal crystals of ice that fall from the sky when everything is just right.

And here’s a short film about this one:

So what can these two apparently very different books have in common, aside from their author and publication date?

Underneath both books is a common theme; and that’s the fragility of the planet. In the case of Saint Death, we see a world that presages a much more common future, one we will come to know all too well, as inequalities grow in many places across the earth, and as walls are built between those who have and those who have not. As people try to move to get away from poverty or violence or both, pictures like the ones we see every day from Calais will become ever more frequent.

In some parts of the world, where migration is driven by hunger, and the collapse of food supplies, this situation will be exacerbated by the effects of climate change. To take Mexico as one example, years of crops failures in central states caused mass migration to the north, causing the population of Juárez to balloon massively in the 1990s, bringing people right up to the American border. Similar scenes are occurring and will occur in other fragile parts of the world, and that brings me to Snow.

This book is about the art and mythology of snow, about those who love it and live in it, about the science behind a snowflake, and other things besides, but the underlying message is one of concern.  It envisions a world where, as global temperatures rise, we come to a day when the very last flake of snow melts. Already the survival of the Arctic ice shelf looks far from certain. When that ice melts, when the albedo of the surface of the planet changes, and when the sea levels start to rise, then we will witness mass migration that will make what we have today appear trivial.