Skip to content
I have a new book coming out this week, set in Paris in 1899, and as a fair old chunk of it is set in the district of Pigalle, I thought it would be worth sharing one or two interesting things I came across during what I prefer to pass off as ‘research’. 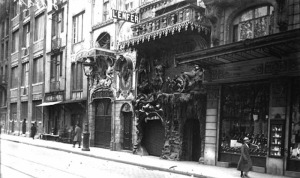 Paris, as everyone knows, is the city of light. But such simplicity can never be all there is to say about a place with such a long and intricate history, and Paris has its share of darker things too. For one hundred and fifty years, one area of the city has been synonymous with scandal, vice and covert thrills – Pigalle.
Today, the centreline of Pigalle – the Boulevard de Clichy – is commonly known as the sex district of Paris. It’s lined with garish vulgarity, and at Place Blanche is home to the most famous cabaret of all, the Moulin Rouge. In researching Mister Memory, however, I came across an almost forgotten world of strange cabarets and bizarre clubs in the area at the turn of the 19th to 20th centuries, and read about some things that could make one’s hair curl, even as jaded as we perhaps feel we are in the 21st century.
So which Pigalle is the more extreme? Which the naughtier? Which one would be more fascinating to spend an evening in? That of 2016, or that of 1899?
–
Where else to start but the Moulin Rouge? Opening in 1889, the Moulin has changed its nature several times over the course of 127 years. Originally it was conceived as a place in which the French Cancan (then called the Quadrille) could be danced, and if you’ve seen the Baz Luhrman film, you’ve had a closer glimpse of its original nature than you might have imagined. The Moulin was closely consulted by the filmmakers and one or two of its more outlandish features are based in reality.

At the time, the Moulin consisted of a ballroom for the performance of various dance crazes announced on a little sign above the dance floor, and boasted a garden next door, in which there really was a giant model elephant. And though this monumental pachyderm did not sport a boudoir on its back, there was a belly dancer in one of its legs – admission to gentlemen only, naturellement.

Later in its life the Moulin was transformed into a concert theatre – home to the new concept of the revue, it became a nightclub and then a cinema and in 1951 reopened its doors in something close to its current format – a large scale cabaret theatre for the production of large show routines – hundreds of kilos of feathers and sequins being the order of the day then and now. Today it’s hard to think of the Moulin Rouge as extreme. A few topless dancers aside (this is France, after all) the show on offer today is an over- or after-dinner affair, a ‘family show’ (the words of the Moulin’s Press Officer), and at least half the punters are tourists from outside France, arriving by the coachload and queuing rather incongruously just before kick off along the seedy Boulevard de Clichy.

In fact, I was very firmly told that the Moulin’s official position is that they are not even in Pigalle, but the ‘foot of Montmartre’, not wishing to be associated with the more sordid sights to be found in the Boulevard. This makes the Moulin not so much an anachronism but an anatopism – something that is out of place, rather than out of time. If the Moulin were in the Champs Elysees, for example, as its main rival Le Lido is, no one would think twice about it.

Back at the end of the 19th century however, scandal often clung to the Moulin. Though topless dancers did not officially arrive in the district till 1920 (when a still-extant rival down the road, La Nouvelle Eve, started the trend) there would be from time to time something a little too much for polite Parisian society to ignore, for example, at the art student’s ball, Le Bal des Quat’z’Arts, of 1893, the presence of numerous nude women (and the occasional naked man) in parades depicting scenes from history and mythology was enough to result in a lawsuit.

And all this is to say nothing of the near riots that the students themselves inaugurated as they wound their way up from the Latin Quarter to end up cavorting in Place Blanche, in full costume (such as gladiators, cavemen, Native Americans etc etc) and libated to an extreme. Accounts of such outings make wonderful reading in the biography of an American art student of the day entitled Bohemian Paris of Today, from which it’s clear that, at the time, some Parisians enjoyed the thrill of spending an evening in Pigalle, as distinct from an evening in Montmartre, which was also fun, but nothing like as scandalous. Or as dangerous. Pigalle was, at the time, home to ‘Les Apaches’ – gangs of thugs who steamed down the boulevards, robbing or fighting, and were certainly to be feared. They had their own gang style, as did their women, who would often be pimped out by their own boyfriends.   The frisson of daring to rub shoulders with such people was all part of the ‘fun’ to be found in Pigalle, but there were other, more bizarre attractions too and the Moulin Rouge’s elephant was not the only strange site along the Boulevard de Clichy. Some of the other places one might decide to venture into on an excursion to Pigalle were Heaven and Hell.

Here’s a closer look at Hell…

Yes, Saturday night might see you visit both the Cabaret du Ciel and the Cabaret d’Enfer, which were handily placed right next to each other. Inside each place patrons would be greeted by appropriate characters; St Peter or the Devil, for example, and sip themed drinks. The same spot today is a Monoprix (a cheap supermarket), which some local wits compare to Hell anyway.

Just down the road was the Cabaret des Truands (‘hoodlums’) (today the Théâtre des Deux Ânes), which looked like this. . .

. . . and not too far away, my favourite; the Cabaret de Néant – the cabaret of nothingness, where customers would be assailed with a range of sights and experiences to make them ponder our flimsy mortality – lying in a coffin for a few brief moments being one of the attractions on offer.

You know an area has become hipster-level trendy when it gets its own four-letter acronym – Sopi (the network of streets South of Pigalle) may only have recently achieved this status but it’s long been an area of radical and varied nightlife. Opening its doors in 1897, in a dead-end alley off Rue Chaptal, the Théâtre du Grand Guignol was perhaps the most extreme of all the shows on offer, probably anywhere in the world, possibly ever. A sample of titles from the shows on offer will give a little indication of the horrific and sometimes downright bizarre fare on offer: The Dungeons; The Merchant of Microbes; Adultery; The Hanging; The Mark of the Beast among some of its more lurid pieces. 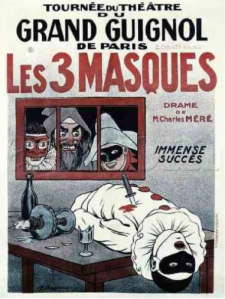 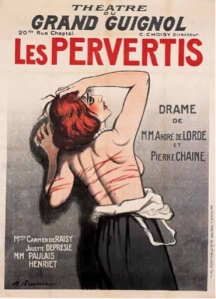 The raison-d’être of the theatre was to perform plays to shock and amaze, and if no one fainted, was sick, or left during the evening, they hadn’t been doing their job properly. The work of the Théâtre du Grand Guignol predates the advent of extreme horror films by several decades, and great use was made of all kinds of special effects to simulate (we hope) torture, branding with hot irons, the letting of blood and even acid attacks to the face. Such was the realism of these effects that barely a night passed without incident in the audience, either in horror, or outrage – another signature tactic was the risqué nature of some pieces, frequently pushing the boundaries of how much nudity was permissible. Unlike so many of the other cabarets and theatres of the time, this one is still at least a theatre, and a good one at that; the International Visual Theatre.

Here, they dance the Cancan in the traditional way, a dance that Sylvanie points out was originally full of meaning, and political meaning at that – the various poses of the dance symbolising, and mocking, all sorts of establishment figures; legs joined in an arch represented the Church, legs held (rather impressively) up at the shoulder stood for the soldier at arms, and so on. None of this, of course, is known to the causal visitor to Pigalle or the Moulin Rouge today. Sylvanie thinks that’s a great shame, and is happy to talk to us for a long time about the area, and the way in which it’s changed. And is still changing, though one thing remains true across the decades; this has always been a defiant corner of the city. ‘Pigalle,’ she says, ‘is not a easy girl’. As yet, there’s not so much sign of the rapid recent gentrification of the area that Soho in London has seen. But it’s on its way; as rents rise and as more ‘respectable’ enterprises creep eastwards along from Place du Clichy, the area will certainly change. That’s something that both the Moulin Rouge and Sylvanie de Lutèce will appreciate. The Moulin will no longer find itself stranded in a seedy sea of sex shops, and there’ll be more tourists willing to come and find more creative performances, plays, mise-en-scènes and the like by Sylvanie and her friends, things that might remind us of the wonderful variety, now long gone, but which was once upon a time found in Pigalle.

Mister Memory published 13th July, 2016, by Mulholland Books. Available here.
My thanks to Sylvanie de Lutèce, and Fanny Rabasse of the Moulin Rouge.