This post first appeared at the wonderful blog site, This Craft Called Writing, which really gets into the techniques behind writing.


LESS IS MORE
I’m a great believer in less-is-more. That should be apparent merely from the page extent of my books – they tend to the shorter side, in some cases, very deliberately so. Revolver, for example, is only about 33,000 words long. It’s my belief that many books, films, operas are simply too long, and that if you’re working well, you can actually achieve a more powerful overall effect by keeping your writing on the sparer side.
Of course, there’s an immediate risk that if you are going to keep things shorter, that you won’t sufficiently ‘build the world’, or ‘develop character’, or any one of the many others things you’re supposed to do when you write a book. But I think it’s just a question of choosing just the right things, just the right words, to do your work for you, and I would always rather err on the side of leaving a reader wanting more than overwhelming and boring them with a five page description of a new character the protagonist has just met, or three pages of detailed depiction of the room into which they have just walked.
In any case, I read somewhere that studies have shown that a reader only remembers three things from a lengthy description of a new room, for example, and if that’s the case, then why overload your passage with much more than that? The goal is to bring the scene to life, and I think there’s a false belief that some people have which means that as the writer, you have to describe everything. You don’t. One of the principal beauties of writing is that you can allow your reader to do half the work for you. If you choose just the right details to mention, and mention them in the most powerful or elegant way you can, you will immediately trigger a wealth of other images and suggestions in your readers’ minds.
I’ve got a new book out, called She Is Not Invisible, and it’s taught me something I found very interesting. I run creative writing courses from time to time, for Arvon and other places, and one of the short warm-ups I sometimes get the students to do involves describing a scene without the use of sight. I always feel a bit GCSE English at this point, but the results are often worthwhile – after the initial protests that it’s too limiting, the final pieces of writing are sometimes the best pieces of the week. 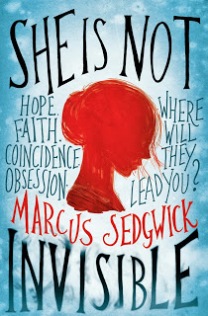 This is pertinent to She Is Not Invisible because the book consists of a first person narrative by a girl who has been blind from birth. The whole book, therefore, has to let the sense of sight go completely unused; but here’s the thing I found interesting: only when it was done did I realise that far from finding it limiting, I actually found it liberating. It was such a joy to be freed from the tyranny I think we often all feel; of ‘describing a scene fully’.  With no sense of sight to have recourse to, I instead built scenes from the other senses, predominantly hearing, of course, but others too.
Here’s a short extract that shows this at work.
‘Benjamin!’ I called, waiting for him to come back.
It was probably only a second or two but I freaked out and rushed after him, then kicked into a bag or something, and went sprawling full length on the floor.
Even in the noise of the airport I heard everyone around me go quiet as they watched and I knew I’d made a stunning spectacle of myself. I’d landed with my legs over the bag and my arms flung out in front of me.
‘Am I invisible?’ a man said, angrily.
My sunglasses had shot off my face somewhere and I heard him sigh.
‘Why don’t you look where you’re going? My laptop’s in there.’
I got to my feet and managed to kick his bag again.
‘For God’s sake,’ he said.
‘I’m sorry,’ I muttered. ‘Sorry.’
I kept my head down as the man unzipped his bag, grumbling.
‘Benjamin?’ I said, but he was already back at my side.
‘Are you okay, Laureth?’ he asked, pushing something into my hands. ‘Here’s your glasses.’
I slipped them on quickly.
‘I’m really sorry,’ I said in the direction of the man, and held my hand out for Benjamin to take. ‘We’d better get a move on.’
No need for the sight of anything in there. Who cares what colour the man’s bag is, for example, or what make it is? The embarrassment of our narrator is the point in hand, and though I will of course return to the visual in my next book, it was a good experience to have.
In fact, in She Is Not Invisible, I decided to impose a few more restrictions on my writing. I’ve long been wanting to write a book that follows the maxims of Oulipo, or writing that is constrained in some way. Oulipo is a fascinating thing, and includes some extraordinary works, such George Perec’s famous A Void, written without once using the letter ‘e’.  The proagonist’s father in She Is Not Invisible is a writer obsessed with two things; coincidences, and the number 354. I decided to see in how many ways I could incorporate this number into the text, from the chapter headers to the word count of the book even to the blurb on the jacket and the page count of the novel. And once again, far from finding this limiting, I actually found it stimulated me to be more creative than I might otherwise have been.
So try taking something out of your writing once in a while. You might indeed find that less is more.