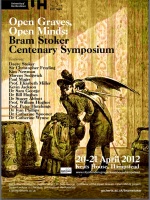 Well, next Friday and Saturday I’ll be attending and speaking at OPEN GRAVES, OPEN MINDS; the Bram Stoker Centenary Symposium being held at Keat’s House, London. I’m delighted to be going along and honoured to be speaking in the company of some wonderful academics and other writers including Sir Christopher Frayling and my good friend Dr Kevin Jackson.

The conference literature says “Delegates will investigate the most famous vampire narrative of all, Dracula, on the centenary of Bram Stoker’s death and interrogate its relationship to new developments in interdisciplinary research, drawing on nineteenth-century vampire archetypes. Dracula, of course, is the seminal vampire novel (though it has its antecedents); a gripping narrative that dramatises anxieties over sexuality, new technologies, foreignness, and modernity. Invited speakers will debate the evolution of Dracula from novel to theatre, film to comic book.”

At the time of his death, Stoker was better known as a minor personality in Victorian London, as the theatre manager of Sir Henry Irving, who’d been Britain’s greatest actor. His obituary did mention that he’d written a certain book called Dracula, but actually his death was overshadowed by the fact that that large boat had sunk in the Atlantic five days before, and the papers were full of Titanic news.

So at the conference we’ll be paying due deference to his Stokerness, leaving no (grave) stone unturned, or indeed pun to rest in peace, as we investigate various aspects of the great man.
My talk is going to focus on how the folkloric vampire differs so markedly from the one we’ve come to know, largely though not exclusively as a result of Stoker’s book, and is entitled The Elusive Vampire. It’s derived from a chapter I’ve written for the forthcoming book; Open Graves, Open Minds: Vampires and the Undead in Modern Culture, edited by Dr Sam George.
All in all it should be good fun, and I’ll be tweeting from the event next weekend.