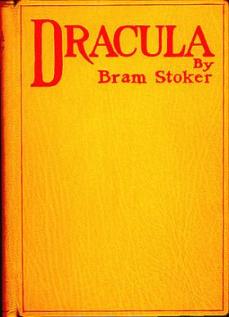 There were vampire novels before Dracula, there have been many since, and there will undoubtedly be more to come in the future, but I doubt Dracula will ever be bettered. Why? Largely because it’s a product of the time it was written, and the man who wrote it – Bram Stoker, a member of high society in Victorian Dublin.

Stoker is the epitome of Victorian society – clearly a rather repressed and oppressed individual on the surface, his fiction betrays a rather different character, implicitly and sometimes explicitly, full of sexualities of dubious natures.
And this is at the heart of why Dracula was, and is, so successful – it strikes to the very core of the contradiction that is the vampire – the attraction to something potentially fatal, not just to your mortal self, but your immortal soul as well.
True, the charisma of the vampire had been set up by Polidori’s allusions to Byron, and another Dubliner, Sheridan Lefanu had already thrown Lesbian vampires into the mix in Carmilla, but Stoker worked these themes, and more, up into a slow burn of a novel that arrives in a final frenzy of blood-letting.
Along the way it uses multiple narratives, a relatively novel technique at the time, to weave a story of obsession, lust, menace and the supernatural.
It is one of the few books I have read several times, and every time I do, I enjoy it more, and it horrifies me more, not just as a reader, but as a writer too, because nothing else that Stoker wrote, before or after Dracula, comes close. He worked for years on the book that was to become his masterpiece, and it’s a frightening thought for a writer to fear that real creativity might abandon you altogether.
This is a guest post that first appeared on Varsity Online…