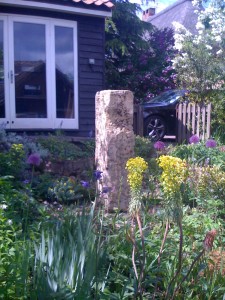 Nope, not a fat Gaul but the new arrival in my garden; thanks to the help of three hefty neighbours and some swearing, I now have a small menhir standing outside my writing shed.

This is good because it makes me ludicrously happy for some silly reason, but bad because it’s one more thing to distract me when I should be writing 😦
However, the good news is that despite the arrival of the obelisk, I’ve (at last) started writing my new book. Four thousand words in, and so far we have three deaths and a funeral.
Business as usual then for Sedgwick? Maybe, but this one feels a bit different from recent books, I think more in the style of The Book of Dead Days, but as Ron Manager would say, it’s early doors yet, game of two halves, anything could happen.
Which reminds me, it’s only ten days till that greatest distraction from writing of all. The World Cup! Thank God it only comes every four years….